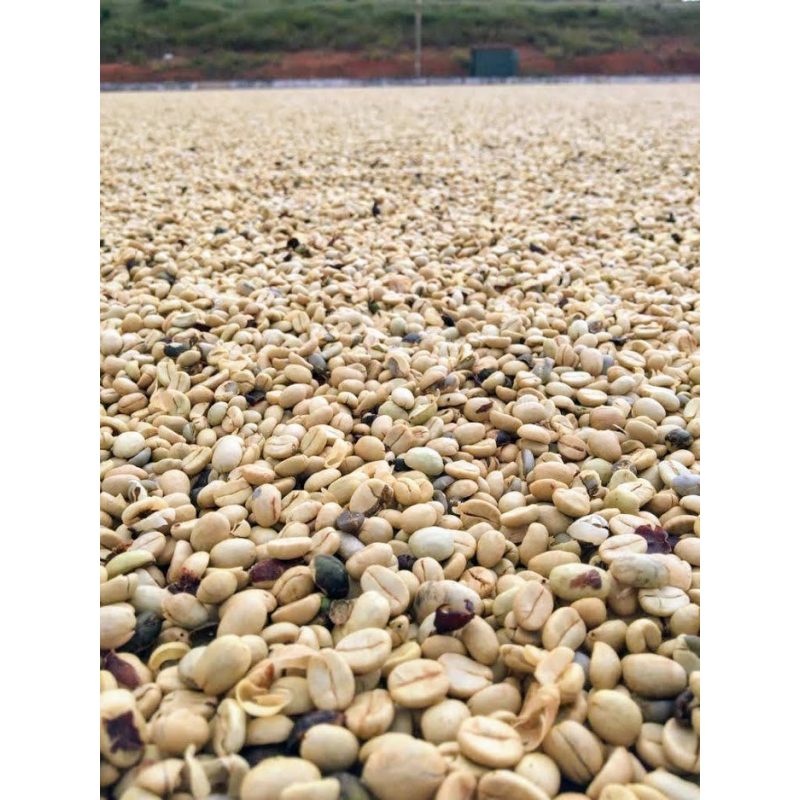 The NY2 designation assures us that there are no more than 4 visible beans with defects in a 200 gram sample. This small number of defects would be unnoticeable in most cups, ensuring a consistent and delicious flavour. This bean is screen 17/18, which is the second-largest possible bean size. The large, consistent beans are between 6.75 and 7 millimetres. This small variation among beans makes it easier to roast all beans to the same level.

Screen sizing is part of the final milling process in preparation for bagging and export. Milled green coffee is introduced to a large machine composed of multi-tiered tables, each with a ‘screen’, that sit on top of one another. In Brazil, the first screen has wires slightly less than 8 millimetres apart. When green coffee enters the machine, the tables vibrate, and all beans smaller than 8 millimetres fall through the screen to the next screen. This next screen size is slightly smaller than the previous and again, beans are shaken until all the smaller ones fall through. This process is repeated several times until the smallest size, 5.5 millimetres is reached. Beans are separated and graded according to the screen they did not fall through. Using this method, processors can achieve greater consistency in size and make roasting easier.

Finally, “ss” stands for “strictly soft” which means that the cup is stable and clean.

Cooxupé has a long history in Brazil. It was founded in 1932 as a cooperative that provided agricultural credit. In 1957, Cooxupé developed into the Regional Coffee Growers’ Cooperative of Guaxupé. After their redesign the cooperative began buying, milling and selling coffee to an international market. With over 60 years of experience in the national and international sector, Cooxupé is a standard in the Brazilian coffee industry.

Today, they sell their coffee to companies in more than 40 countries. They represent approximately 12,000 members. Their producers work in Sul de Minas and Cerrado in the Minas Gerais region as well as growers in the Rio Pardo Valley in São Paulo. Ninety-seven percent of those members are small-scale farming families. For these members, they own small plots of land and coffee production is their main source of income, so receiving remunerative prices is vital to their continued livelihoods.

As a big player in coffee in Brazil, Cooxupé takes their social responsibility towards their members seriously. In the rural areas where the cooperative works they have developed health and scholarship programs and provided education and agricultural training. In these trainings, they put a lot of focus on future generations of coffee farmers and building sustainable farming systems.

An extremely successful program of theirs, called Escola Consciente, won the Andef Award in 2014. The Andef Award is considered one of the most important awards in Brazilian agriculture.

Cooxupé continues to utilise their size to make a difference. In 2013 they launched the Environmental Education Center to help reduce the impact of farming by encouraging future generations of farmers to be even more eco-conscious.

About 40% of all coffee in the world is produced in Brazil - nearly 3.6 million metric tons annually. With so much coffee produced, it’s no wonder that the country produces a wide range of qualities. Brazil produces everything from natural Robusta, to the neutral and mild Santos screen 17/18, to the distinctive Rio Minas 17/18. In recent years, Brazilian producers have also begun investing more heavily in specialty coffee production. Through our in-country partners in Brazil, including our sister company, we are able to provide a wide range of Brazilian coffees to our clients: from macrolot to microlot.

Today, the most prolific coffee growing regions of Brazil are Espirito Santo, São Paulo, Minas Gerais, and Bahia. Most Brazilian coffee is grown on large farms that are built and equipped for maximizing production output through mechanical harvesting and processing. The relatively flat landscape across many of Brazil’s coffee regions combined with high minimum wages has led most farms to opt for this type of mechanical harvesting over selective hand-picking.

In the past, mechanization meant that strip-picking was the norm; however, today’s mechanical harvesters are increasingly sensitive, meaning that farms can harvest only fully ripe cherries at each pass, which is good news for specialty-oriented producers.

In many cases and on less level sections of farms, a mixed form of ‘manual mechanized’ harvesting may be used, where ripe coffee is picked using a derriçadeira – a sort of mechanized rake that uses vibration to harvest ripe cherry. A tarp is spanned between coffee trees to capture the cherry as it falls.

With the aid of these newer, more selective technologies, there’s a growing number of farms who are increasingly concerned with – and able to deliver - cup quality.