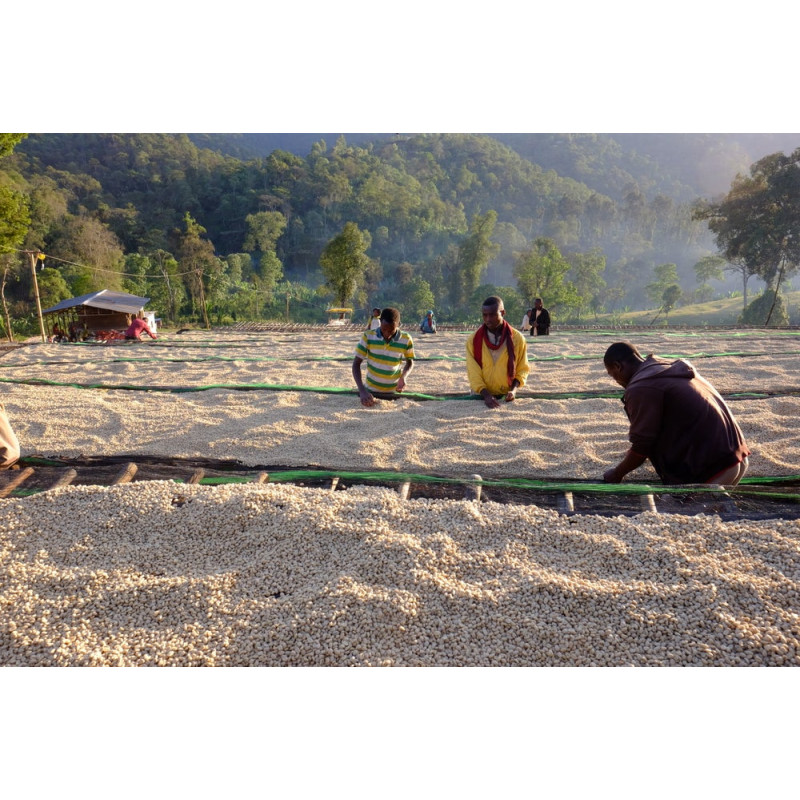 Light coffee with a little acidity and a light finish of bitterness.

Sidamo coffees have a profound complexity that many attribute to the diversity of local landrace varieties. This coffee, produced by smallholders and processed at washing stations, preserves the depth and breadth of flavor.

The Sidamo region of Southern Ethiopia holds the distinction as one of the three trademarked coffee regions of Ethiopia. Alongside Harrar and Yirgacheffe, Sidamo holds a Designation of Origin for coffee grown in the region. That's unsurprising when you consider the high altitudes of 1,550 to 2,200 meters above sea level, plentiful rainfall and fertile soil that makes the coffee grown in this region so remarkable.

The Sidamo region is named after the indigenous ethnic group, the Sidama, who call the region their home. On Sidamo’s Eastern border lies the large regions of Arsi and Bale while to the West, Sidamo is bordered by Gamogofa.

Sidamo lies in the path of the Great Rift Valley and thanks to this, the countryside of Sidamo is lush and green. There are several freshwater lakes that provide drinking and agricultural water and account for the densely populated nature of this region.

The Great Rift Valley spans from the northernmost tip of Ethiopia across Kenya and all the way to the southernmost region of Tanzania. It is home to some of the oldest-known fossils of humankind, which suggests its importance in the early development of humanity.

Many would say that the strength of Sidamo coffees lie in the regions’ diversity of profiles. The many microclimates and varying soil types lead to striking differences from town to town. But across all Sidamo coffees is a profound complexity that many attribute to the diversity of local landrace varieties. Varieties can differ from town to town and even farm to farm where each farmer may have more than one unique varieties seldom or never found outside their plot.

When all these different varieties are blended at the local cooperative, the resulting blend expresses the complexity of the plant genetics in the area.

Sidamo coffees are distinguished with three markings: a grade, a geographical letter designation and an indication of whether it is washed or unwashed. In addition to their geographical indications, subsequent markings may be added to convey quality and other information.

Farming methods in Sidamo remain largely traditional. Sidamo farmers typically intercrop their coffee plants with other food crops. This method is common among smallholders because it maximises land use and provides food for their families.

In addition to remaining traditionally intercropped, most farms are also traditional and organic-by-default. Farmers in Sidamo typically use very few—if any—fertilisers or pesticides. Most farm work is done manually and very few tasks are mechanized, even during processing.

Due to the size of most plots, coffee is typically handpicked by landowners and their family.

Once fermentation is complete the parchment is thoroughly washed and is then graded in washing channels, separating each lot into two grades based on density. Once graded, the coffee is sometimes soaked under clean spring water in tanks for 12-24 hours to remove all traces of fermented mucilage.

After washing, the coffee is delivered to raised beds to dry under shade for 10-14 days until moisture content reaches 12%. During this time, the coffee is regularly turned and hand sorted several times to remove any damaged or discolored beans. Coffee is covered with plastic during the hottest hours of the day to protect the parchment from drying too quickly and overnight to prevent condensation from seeping into the drying parchment. This level of labor and love result in a truly exquisite cup profile.

In the Ethiopian grading system, grade 2 refers to the cup quality as well as physical quality of a coffee. A grade 2 allows between four and 13 full defects per 300gr green sample. The cup typically has fruity and clean characteristics, without any off-flavors.

Ethiopia Sidamo 2 is a classic in every coffee range and especially popular in blends. The cup quality can be very surprising for prices well below the grade 1 price point. For us, grade 2 coffee typically sits around an 83-84 cup score.

While Ethiopia is famous as coffee’s birthplace, today it remains a specialty coffee industry darling for its incredible variety of flavors. While full traceability has been difficult in recent history, new regulations have made direct purchasing possible. Our importer is connected directly with farmers to help them produce top quality specialty lots that are now completely traceable, adding value for farmers and roasters, alike.

The exceptional quality of Ethiopian coffee is due to a combination of factors. The genetic diversity of coffee varieties means that we find a diversity of flavor, even between (or within) farms with similar growing conditions and processing. In addition to varieties, processing methods also contribute to end quality. The final key ingredients for excellent coffee in Ethiopia are the producing traditions that have created the genetic diversity, processing infrastructure and great coffee we enjoy today.

Most producers in Ethiopia are smallholders, and the majority continue to cultivate coffee using traditional methods. As a result, most coffee is grown with no chemical fertilizer or pesticide use. Coffee is almost entirely cultivated, harvested and dried using