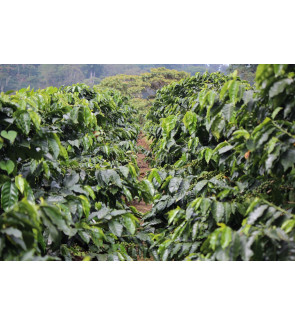 <p>Nicaragua is a rather new country within specialty coffee. Political, economic and also environmental (e.g. hurricanes) disturbances and instabilities kept the country from moving into the specialty market any quicker. The pioneering work of some families, like the Mierisch family, with a clear vision on producing quality coffee supported by e.g. the Cup of Excellence annual competition created the necessary awareness for growing specialty coffee among Nicaraguan coffee farmers.</p> <p>The Mierisch family owns a couple of excellent farms in the Matagalpa and Jinotega departments and runs their own dry-mill ‘Don Esteban’. Finca El Limoncillo is located in the Matagalpa department, in a town called La Dalia. The farm is named after the Limoncillo (a small type of lemon) that was already growing on the farm when it was purchased in 1930 by the Mierisch family making it the 2nd oldest coffee farm in the family (Los Placeres is 1st). Typica was the sole varietal grown on the farm up until the mid-1990’s, but due to climate change, unstable market pricing, and vulnerability to coffee leaf rust the Mierisch family decided to diversify the varietals and also focus extensively on quality over quantity. Harvest season goes from October to January at the farm where coffee grows between 850 and 1110m. The farms has a clay loam soil type and Eucalyptus is the main shade tree. The farm has its own wet-mill and produces washed coffee but also pulped naturals and naturals. The farm won a nice 2nd place at the Cup Of Excellence 2008 with a washed Javanica.</p> <p>The excitement of our first visit to Nicaragua in 2018 (enlarged by another of our partners, the Balladarez family, winning the Cup of Excellence on the night we left) came to an abrupt end only a few weeks later (April 2018) when student protest against the Ortega regime escalated and in the weeks and months that followed hundreds of people were killed and many others jailed. Again a very confusing and sad chapter in Nicaragua’s history. Not only from a human point of view but it also created (again) hard times for coffee producers as the economic stability disappeared too. A few months after the outbreak of the protest the situation slowly improved but still to this day is very uncertain. Due to the many safety issues there was no COE-competition this year. The situation also caused us to check and double-check with the Mierisch famly as well as the Balladarez family to hear from them they were doing fine and if our 2019 visit would be safe. We decided to visit both of them again and I was glad to be welcomed by Erwin Mierisch at the airport and to see he was doing fine.</p> <p>During my second visit (2019) I cupped many coffees and experiments at the Mierisch coffee lab and selected two fine lots.</p> <p><strong>LOT DESCRIPTION:</strong></p> <p>This specific lot (n°1909) from a plot called ‘Bochinche’ at Finca El Limoncillo consists of 25 bags (69kg). The coffee cherries were depulped leaving as much fruit flesh on as possible (pulped natural) and transported to the dry-mill where they were put into air-tight barrels to start the ‘anaerobic’ fermentation (simply stated: fermentation without the presence of oxygen). The barrels were kept inside the warehouse at a temperature of around 24 degrees Celsius for 48 hours. After that the barrels were opened and the coffee was spread out on the patio for 4 days of drying in the full sun (to make sure the fruit flesh is dried properly). Next they were moved to a greenhouse where they dried another 14 days on African (raised) beds. </p> <p><strong>REGION:</strong> matagalpa</p> <p><strong>LOT:</strong> 'javanica - pulped natural anaerobic-micro-lot (shb - ep)</p>
Price €9.25
Back to top 