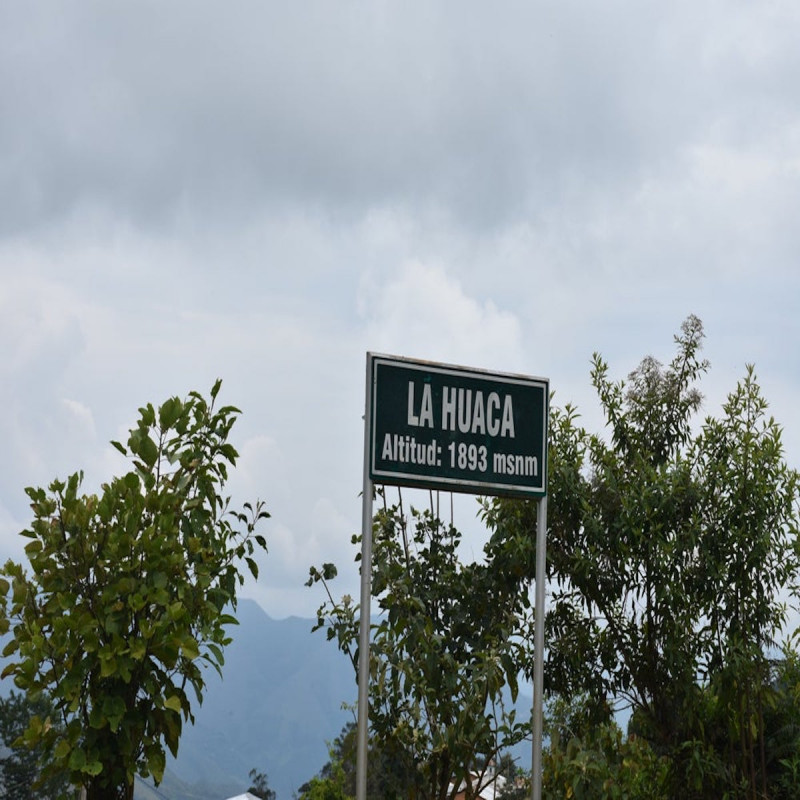 This community lot is grown by small holder farmers living and farming around the village of La Huaca in Huabal District, Peru. The farmers are members of Coopagro, a cooperative operating in San Ignacio, Jaén and Cutervo in Cajamarca. Before becoming members, most producers had only sold their coffee locally in Cajamarca at low prices. With Coopagros’s support and training, smallholder farmers in La Huaca, and other areas where the cooperative is active, have been able to improve their coffee quality and sell their harvest for higher prices.

All contributing members receive training in the best techniques for renovating their farms. At the end of each harvest, farmers prune their trees to help ensure plant productivity and health in the coming year. Farmers also construct and oversee their own seedling nurseries to keep rootstock on the farm young and healthy. Internal cooperative assessors regularly visit farms to provide personalized advice on best practices and help producers troubleshoot any problems.

Coffee processing in Peru is usually done on the farmer’s own land and infrastructure can be quite rudimentary. And yet, the traditional methods, when combined with technical training and care for quality from Coopagro, do a fine job producing quality coffee. Most farmers own their own mills, which are usually located on their farms.

At contributing farms near the town of La Huaca, cherry is selectively handpicked and pulped that same day.  After undergoing dry fermentation for 15-25 hours, parchment is washed and then laid on drying beds to dry for approximately 10 to 15 days.

279 farmers across a number of villages the district of Huabal came together in 2016 to form Coopagro. Today, Coopagro boasts over 650 member farmers. Most contributing producers grew up on coffee farms and are the latest in long family legacies of coffee farming.  Coopagro supports member farmers, encouraging them to broaden their ambitions and produce higher quality coffees for specialty markets. The cooperative also provides technical support to farmers to help them increase their quality.  To do this, Coopagro focuses on several agricultural ideas. First, they encourage farmers to replace existing Catimor rootstock with higher quality varieties like Caturra, Pache, Typica and Bourbon. Then, to complement the increasing susceptibility to Coffee Leaf Rust (CLR), Coopagro outfits farmers with Organic agricultural methods to combat CLR and to increase yields sizes. These practices include proper fertilization, annual pruning and renovation techniques, including individual nurseries on each farm. Internal Coopagro assessors regularly visit farms and provide targeted advice and personalized troubleshooting for individual producers.  Thanks to Coopagro’s support and the dedication of its members, one member placed #1 in the 2017 Cup of Excellence competition.  At the cooperative warehouse, Coopagro analyzes each members’ lot and determines in which market the coffee will sell best. Farmers whose coffees are marketed as microlots receive higher premiums.  Coopagro is committed to organic principles and trains all farmers in organic agriculture. The cooperative is currently organic certified by both USA NOP and EU standards.

Though coffee arrived in Peru in the 1700s, very little coffee was exported until the late 1800s. Until that point, most coffee produced in Peru was consumed locally. When coffee leaf rust hit Indonesia in the late 1800s, a country central to European coffee imports at the time, Europeans began searching elsewhere for their fix. Peru was a perfect option.

Between the late 1800s and the first World War, European interests invested significant resources into coffee production in Peru. However, with the advent of the two World Wars, England and other European powers became weakened and took a less colonialist perspective. When the British and other European land owners left, their land was purchased by the government and redistributed to locals. The Peruvian government repurchased the 2 million hectares previously granted to England and distributed the lands to thousands of local farmers. Many of these farmers later grew coffee on the lands they received.

Today, Peruvian coffee growers are overwhelmingly small scale. Farmers in Peru usually process their coffee on their own farms. Most coffee is Fully washed. Cherry is usually pulped, fermented and dried in the sun on raised beds or drying sheds. Drying greenhouses and parabolic beds are becoming more common as farmers pivot towards specialty markets.

After drying, coffee will then be sold in parchment to the cooperative. Producers who are not members of a cooperative will usually sell to a middleman.

The remoteness of farms combined with their small size means that producers need either middlemen or cooperatives to help get their coffee to market. Cooperative membership protects farmers greatly from exploitation and can make a huge difference to income from coffee. Nonetheless, currently only around 15-25% of smallholder farmers have joined a coop group.