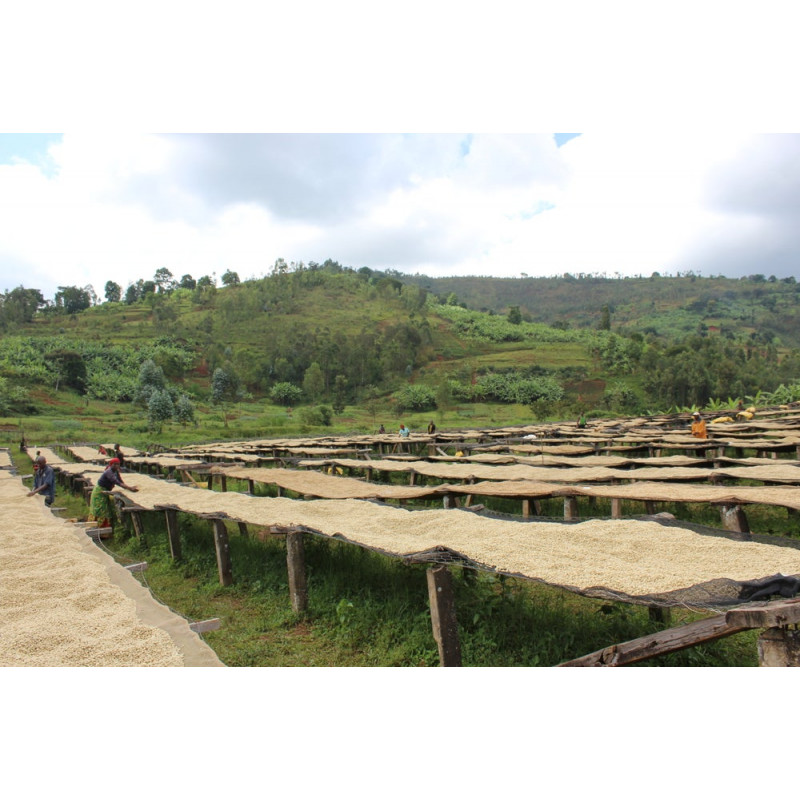 There are 3,193 smallholders living around Kayanza, Burundi who deliver their cherry to Yandaro Central Washing Station (CWS). We are excited to import this coffee from our in-country partner Greenco. In addition to operating 13 washing stations in Burundi and processing excellent coffee, Greenco is also working with communities to increase farmer livelihoods and general equality in coffee producing areas.

Yandaro CWS sits close to the border with Rwanda, in the Kayanza province. Both countries share special growing conditions in the corridor that connects the south of Rwanda to the north of Burundi. This region produces many of our favourite coffees both in Rwanda and Burundi.

The washing station is in the valley where the eponymous river runs. The growing area around the station benefits from being close to the Kibira Rainforest. A rainforest is a healthy ecosystem that helps maintain groundwater reserves and nutrition in the soil for the region surrounding it. With its closeness to a large river, Yandaro has a very strategic location in a high-potential coffee region.

The station serves 3,193 local coffee producers from 22 hills around the station. The average altitude in the area is 1,800m. During the harvest season, Yandaro processes more than 1,200 metric tonnes of coffee. The region has a mild climate with average temperatures between 18 and 25° Celsius, depending on the altitude.

Yandaro CWS participates in a number of farmer outreach and support projects include a goat and pig project, Farmer Hub, strengthening cooperatives and distributing fertilizer and coffee trees.

Most coffee trees in Burundi are Red Bourbon, for reasons of quality. Because of the increasingly small size of coffee plantings, aging rootstock is a very big issue in Burundi. Many farmers have trees that are over 50 years old, but with small plots to farm, it is difficult to justify taking trees entirely out of product for the 3-4 years it will take new plantings to begin to yield. In order to encourage farmers to renovate their plantings, Greenco purchases seeds from the Institut des Sciences Agronomiques du Burundi (ISABU), establishes nurseries and sells the seedlings to farmers at or below cost. At the washing station, farmers can also get organic fertilizer from reconverted coffee pulp.

Despite the ubiquity of coffee growing in Burundi, each smallholder producers a relatively small harvest. The average smallholder has approximately 250 trees, normally in their backyards. Each tree yields an average of 1.5 kilos of cherry so the average producer sells about 200-300 kilos of cherry annually.

During the harvest season, all coffee is selectively hand-picked. Most families only have 200 to 250 trees, and harvesting is done almost entirely by the family. Greenco knows that even small distances can be time consuming and expensive to travel for smallholder farmers, and they know that receiving cherry immediately after harvest is crucial to quality.  Therefore, smallholders can bring their cherries either directly to a central washing station (CWS) or to one of the 12 collection sites situated throughout growing areas. Farmers are paid the same for their quality cherry regardless of where they bring their cherries. In this way, farmers are not disadvantaged due to their location and Greenco bears the cost of transport to CWS’s.

Quality assurance begins as soon as farmers deliver their cherry. Cherries are wet processed under constant supervision. The pulping, fermentation time, washing, grading in the channels and a final soaking is closely monitored. All cherry is floated in small buckets as a first step to check quality. Greenco still purchases floaters (damaged, underripe, etc) but immediately separates the two qualities and only markets floaters as B-quality cherry. After floating, the higher quality cherry is sorted again by hand to remove all damaged, underripe and overripe cherries.

After sorting, cherry is de-pulped within 6 hours of delivery. The machine can process up to 3 tons of cherries per hour. During pulping, cherry is separated into high- and low-grade by density on a Mackinon 3-disc pulper outfitted with an additional separation disk.  The coffee is then fermented in water from a nearby stream for 10-12 hours, depending on ambient temperature. A small sign on the fermentation tank keeps track of each lot. The sign mentions the washing station name, date of cherry purchase, grade of the bean and the time when fermentation began. Trained agronomists check the beans by hand regularly to ensure fermentation is halted at the perfect time. The station workers trample the parchment for 30 minutes in the fermentation tank. This trampling process helps to remove mucilage on the fermented parchment. After this, the parchment is given fresh water to move it into the washing-grading canal, where it is washed.

After fermentation is completed, coffee is run through washing and grading canals. As the beans flow through, wooden bars that are laid across the canal prevent beans of specific densities from passing through. These bars are spaced across the channel. While the first blockade stops the most-dense beans, the next is arranged to stop the second most-dense beans and so on. In total, the channel separates beans into seven grades according to density. After washing, this parchment is poured onto wooden trays or nylon bags and carried to the drying tables, each in its separate quality group. Each tray and nylon bag of parchment keeps its traceability tag with all info.

The beans are then transported to the drying tables where they will dry slowly for 2-3 weeks. Pickers go over the drying beans for damaged or defective beans that may have been missed in previous quality checks. Usually, each table holds 800kg of parchment. In the peak of the season, the maximum load for a table is 1000kg. Each table has a traceability tag with the lot info. The parchment is left to dry from sunrise to sunset and is covered with a sheet during the evening or when it rains. If the weather conditions are good, the parchment takes on average 10 to 14 days to dry. During this time it is stirred regularly. The moisture level is carefully monitored and any parchment with visual defects is removed. On the table, the beans are dried to 11.5%.

The average cherry buying price for Greenco in 2019 was significantly above average. CWSs make the first payment to farmers between 15-30 June. The second payment comes later in the summer. If the coffee wins a competition or sells for extremely high specialty prices, Greenco gives another payment approximately a year after the harvest season.

Before shipment, coffee is sent to Budeca, Burundi’s largest dry mill. The coffee is milled and then hand sorted by a team of hand-pickers who look closely at every single bean to ensure zero defects. It takes a team of two hand-pickers a full day to look over a single bag. UV lighting is also used on the beans and any beans that glows—usually an indication of a defect—is removed.

The mill produces an average of 300 containers of 320 bags per year. Budeca is located in Burundi’s new capital city, Gitega, with a population of around 30,000 people. Since there are approximately 3,000 people working at the mill, mostly as hand pickers, this means that Budeca employs nearly 10% of the total population in Gitega for at least half the year (during the milling season). The same is true in the provinces of Ngozi and Kayanza, where Greenco and Bugestal are the first employers in the region during the coffee harvest season. This has an incalculable impact on a country like Burundi, with unemployment rates above 50%, especially in rural areas and among young people.

Greenco, a company that oversees and structures washing stations in Kayanza province of Burundi, gives washing stations and producers support all along the production chain. They started their work in 2015, and have dominated all Cup of Excellence competitions in Burundi ever since. Currently, Greenco has 13 washing stations all located in Kayanza in the north of Burundi. The producers receive support from the Greenco CWS managers, who are all agronomic engineers. Greenco’s overall impact through these 13 central washing stations (CWS) extends to over 15,210 coffee producing households.

Greenco works with young agronomy graduates to provide farmer training and manage washing stations. Young graduates are particularly well suited for the work with Greenco because they can all work with computer systems, greatly simplifying the flow of information between the washing stations and Greenco. Also, they have a fresh and systematic approach to coffee production and processing, with up-to-date knowledge about farming practices. The agronomists received additional training from the NGO Kahawatu Foundation on best agricultural practices (BAP). Off season, they provide agronomy assistance to the roughly 15,210 farmers who deliver cherries to Greenco CWS to prepare for the next harvest.

Next to improving quality and productivity, Greenco strives to improve socio-economic and environmental conditions around the washing stations. All of their washing stations have UTZ and 4C certification. One of their focus points is building an efficient supply chain around the CWS.  Greenco is buying 93% of its cherries directly from farmers via collection centres. This way, they improve farm-gate price to the producers.

Environmental stewardship is of paramount importance to Greenco. They have has equipped all washing stations with water treatment facilities and solar panels and batteries. The station has ponds to purify the wastewater from processing before flowing back in the river network. The solar panels provide energy for computers, lighting and smartphones.

Burundi has long been overlooked in comparison to its neighboring East African specialty coffee producing powerhouses. However, Burundi season, for us, is one of the highlights of the annual coffee calendar. The country’s coffee is produced almost entirely by smallholder farmers, and much of this small-scale production is of exceptional quality. With its super sweet, clean and often floral coffees, Burundi, every year, is increasingly is putting itself on the specialty coffee map.

Coffee is of paramount importance to families and the country at large. Considering this, improving and expanding coffee infrastructure is not just a way to improve incomes, it is a way to revolutionize the earning potential of an entire nation.

Sucafina’s history in Burundi goes back to 2007 when Bucafe/Sucafina Burundi was established in Bujumbura. Through Bucafe, we work with several privately-owned washing station management companies and exporters. Our work bridges the entire supply chain, allowing us to be vertically integrated. Our supply chain is solid, reliable and transparent. Due to this, we are more efficient, able to supply better value and positioned to offer both producers and consumers of Burundian coffee a diversity of expertise.